On Friday, February 13, 2015, the presence of Emerald Ash Borer (EAB) was identified and confirmed in Veterans Park on West High Street in the City of Milton. Department of Public Works staff brought their findings to the Wisconsin Department of Natural Resources (DNR) who confirmed the findings to be EAB.  The City of Milton now joins a growing list of Wisconsin communities where the insect has been detected.

Rock County, which includes the City of Milton, has been under an EAB quarantine since 2012 when the borer was found in the County.  Other area counties included in the quarantine are Walworth, Jefferson, Dane, and Green.   Residents should be aware that it is illegal to move firewood out of the EAB quarantined area, as it is the primary means for spreading the EAB.  It is best to keep firewood onsite.  Homeowners who would like more information on the EAB and the quarantine area, are interested in determining whether they have an ash tree on their property, or want information on how to protect your trees from EAB, should visit the City of Milton website at www.milton-wi.gov/EABInfo.

In preparation for the EAB, Milton has not planted ash trees for the past few years on City property.  The Milton Department of Public Works, Parks & Recreation Commission, and Common Council will work on a procedure for removal and replacement of Ash trees on City property.  Terrace trees adjacent to private property and/or on private property are the responsibility of the property owner.

For additional information contact Howard Robinson, Director of Public Works, or Donnie Zimmerman, Working Foreman, at (608) 868-6914 or by email at hrobinson@milton-wi.gov and dzimmerman@milton-wi.gov, respectively.

Posted by Inga Cushman - Assistant to the City Administrator at 2:46 PM

Please visit our website for the packets for the following city meetings scheduled for the week of February 16th:

***The Community Recognition Dinner is also taking place next week on Thursday, February 19th, at The Gathering Place.  Tickets are $25 each and available at City Hall.
Posted by Inga Cushman - Assistant to the City Administrator at 10:45 AM

Police Officer of the Year – Ryan Justice The Police Department Command Staff unanimously chose Detective Ryan Justice as 2014 Milton Police Officer of the Year. Detective Justice was chosen because of the outstanding work he did in helping The Milton Police Department achieve accreditation in December 2014. Detective Justice took over mid-stream as accreditation manager after the departure of Lt. Brad Smith in September 2013.

Citizen Heroism Award – Ryan D. Koenig  The City of Milton recognizes Ryan Koenig with the Citizen Heroism Award for his efforts in preventing an intoxicated driver from leaving an establishment in Milton until police officers arrived to the scene.  Blood alcohol tests were later received showing the driver was a .281 bac when tested after attempting to drive from the scene. Legal proof of intoxicated operation of a motor vehicle in Wisconsin is .08. The driver had recently been arrested in Janesville for operating a motor vehicle while intoxicated with several small children in the vehicle. Ryan is to be commended for physically preventing the driver from leaving the scene in her vehicle and possibly causing injury to herself or some other motorist or pedestrian. Ryan showed concern for the driver upon initially observing her, and later determining that she was incapacitated and should not re-enter the vehicle.  It would have been easy to just say it wasn’t his business and leave it up to someone else to intervene; however, Ryan did the right thing and he is an example to others for his exemplary behavior.

Community Award – William Wallisch  The City of Milton recognizes William Wallisch with a Community Award for his efforts to assist the Milton Police Department in apprehending two males who were arrested for theft.  William contacted 911 when he noticed two males checking the door handles on numerous vehicles.  He told the officer what he observed.  The officer pulled the vehicle over and detained the two subjects inside. Confessions were received from both males that they had gone through 15 to 20 unlocked vehicles and that they had stolen cell phones and money from them. The stolen items were recovered from their vehicle and they were both arrested for theft. William is to be commended for his alert response to this crime as it occurred and his detailed description of the subjects and their vehicle. Not only did William identify a possible crime in progress, but he actively watched the subjects and kept an eye on them until they got into a vehicle and left the area. Without William’s observations and eye for detail, the Milton Police Department would not have been able to identify these subjects and stop a crime in progress.

Library Volunteer of the Year Award – Ruth Wivo  Volunteers play an important role as partners in the Library’s mission and ability to provide the many services it does to the community. Last year over 30 volunteers worked 1,100 hours at the Milton Public Library.  Ruth Wivo has worked at the Milton Public Library for over 21 years, under 3 different Library Directors, and longer than many city employees. She single-handedly maintains and organizes the thousands of books donated each year for our Friends of the Library book sale. Ruth also organizes the many volunteers who spend several days setting up and taking down the sale each year. Her minute attention to detail allows book sale visitors to find books easily and subsequent sales provide thousands of dollars of income for the library each year.  Ruth contributes her time, talents, and hard work for over 200 hours a year, and her efforts help to raise over $2, 500 for library services and programs each year.

Community Award – Kim Powers with Kim’s Kloset  Kim Powers with Kim’s Kloset helps various nonprofit organizations in the Milton community with fundraisers including the Milton Lions Club and Moms on a Mission Exchange (MOME).  She hosts fill-a-bag sales at her business, Kim’s Kloset, where people are invited to fill a paper grocery bag with as many items as they can fit in the bag and pay $10.  Kim donates all of the earnings from these sales to the nonprofit organization hosting the sale.  As a member of the new Milton Lions Club, Kim has also donated her time to the organization.

Community Award – James Bostwick  James Bostwick has been a long standing member of the Parks & Recreation Commission.  He helped extensively with fundraising efforts for the Tails n Trails Dog Park and currently assists with fundraising for the Milton Area Veterans Memorial.  James helps at all of the Parks & Recreation Commission events including last year’s Build Day for the Crossridge Park Playground and the Tails n Trails Dog Park Clean Ups.  He also volunteers his time through the American Legion.  The City of Milton appreciates his continued commitment to the parks in the Milton community.

Community Youth Award – Marci Mitchell-Hallett  The City of Milton recognizes Marci Mitchell-Hallett for her efforts in raising funds and bringing awareness to multiple sclerosis.  Marci organized the MS Lock-In “Staying the Night to End the Fight” on December 6, 2014 with the help of the student council.  All proceeds from the event went to the National Multiple Sclerosis Society-Wisconsin Chapter.  Marci engaged the Milton community both inside and outside the school building.  She had the courage to talk about multiple sclerosis and the fundraiser in an all-student assembly, at a monthly Milton Area Chamber of Commerce (MACC) meeting, and local media outlets.  The event raised more than $3,250.

Employee of the Year – Leanne Schroeder  The City of Milton recognizes Leanne Schroeder as Employee of the Year.  She is a part-time employee, but during the transition period between City Clerks she worked full-time in order to fulfill departmental needs.  Additionally, Leanne helped immensely during the move into the new City Hall.  Leanne worked many long hours and did an amazing job during the interim period. Leanne’s commitment, professionalism, and willingness to always go the extra mile have made her an incredibly valuable member of our team at the City of Milton.

For additional information contact Al Hulick, City Administrator, at 608-868-6900 or by e-mail at ahulick@milton-wi.gov.

Posted by Inga Cushman - Assistant to the City Administrator at 9:43 AM

The Parks & Recreation Commission is working on updating the Comprehensive Outdoor Recreation Plan (CORP), which will allow the City to apply for grants for projects through the Department of Natural Resources and other state agencies. In order to gather public input about the parks in the community, the commission will host a public input session on February 16, 2015 at 6 p.m. in the Council Chambers located at City Hall, 710 S. Janesville Street. The input session will be held in conjunction with the commission’s regularly scheduled meeting. 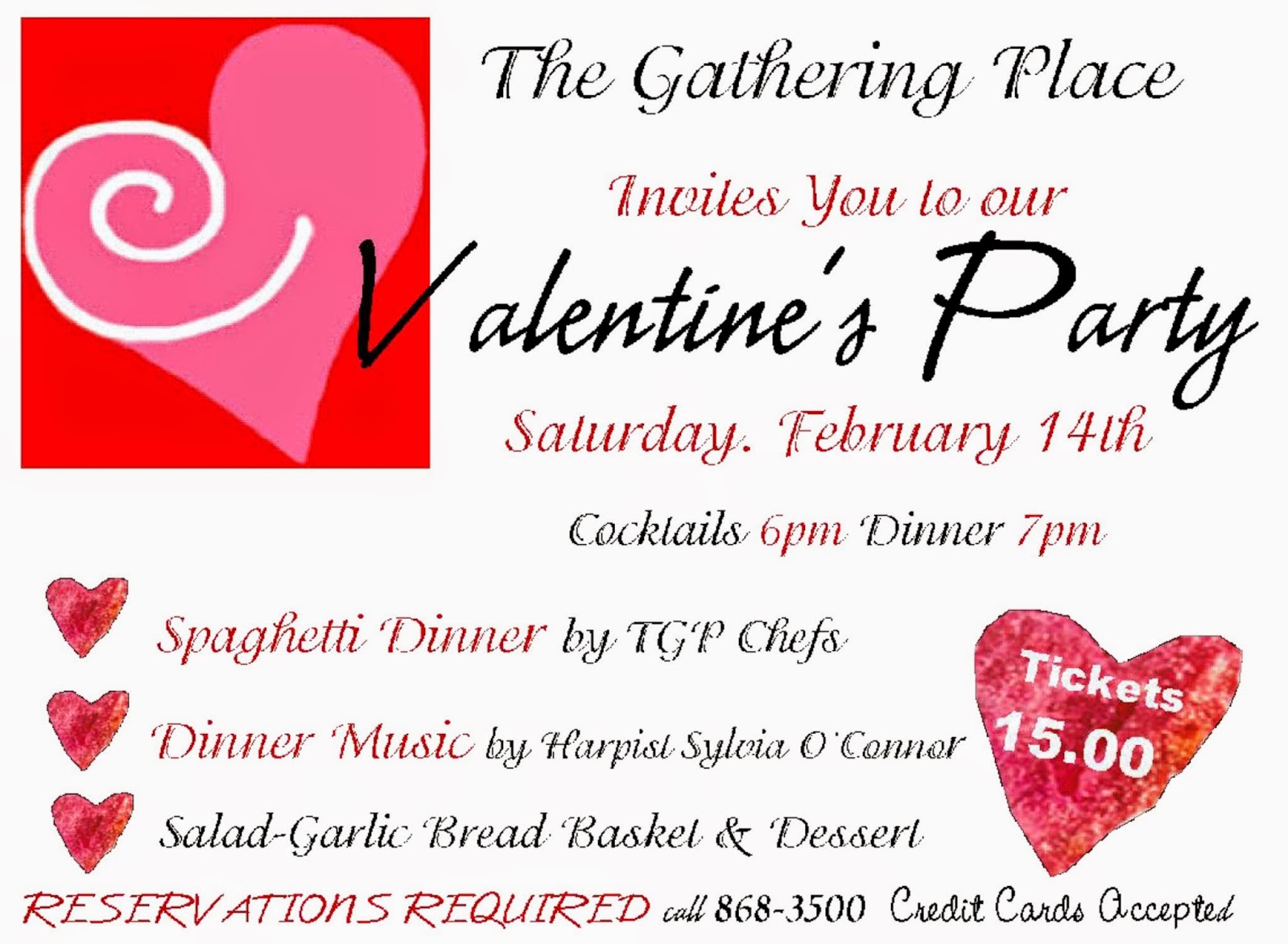 The Gathering Place invites you to their Valentine's Party on Saturday, February 14th.  Cocktails are at 6 p.m., and the spaghetti dinner with salad, garlic bread basket, and dessert will start at 7 p.m.

The cost is $15, and reservations are required.

For more information and to make reservations, call The Gathering Place at (608) 868-3500.
Posted by Inga Cushman - Assistant to the City Administrator at 4:21 PM