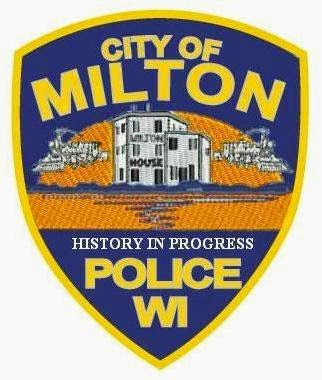 On Wednesday, August 28, 2014 at 3 a.m. the City of Milton Police Department arrested two 16-year-old males from Milton for Theft and Party to a Crime Theft. The two juvenile subjects had entered, and attempted to enter numerous vehicles in the City of Milton shortly before they were arrested. The vehicles were located on Merchant Row, Crandall Street, 2nd Street, Rogers Street, and Tower Hill Drive. The subjects successfully entered and took cell phones and cash from two of the vehicles. They also entered approximately 8 other vehicles; however, they did not steal anything from those vehicles. They also pulled on the doors of at least 20 other vehicles; however, they did not enter those vehicles because they were locked. The vehicles were located on the street, in driveways, and in an alley.

The subjects were in a vehicle when they were pulled over by the police and were found in possession of the stolen items. They confessed to their part in the crimes.

An alert citizen noticed the subjects attempting to enter vehicles as they walked down the street at approximately 2:30 a.m. and called 911. They were referred to juvenile authorities for the Theft and for the Party to a Crime – Theft charges.

As usual, please remove all valuables and lock your car doors when they are parked on the street and in your driveway. The people that had their doors locked were not victimized. Thieves will generally not force their way into a locked vehicle unless they see some sort of item of value in plain sight.
Posted by Inga Cushman - Assistant to the City Administrator at 12:32 PM 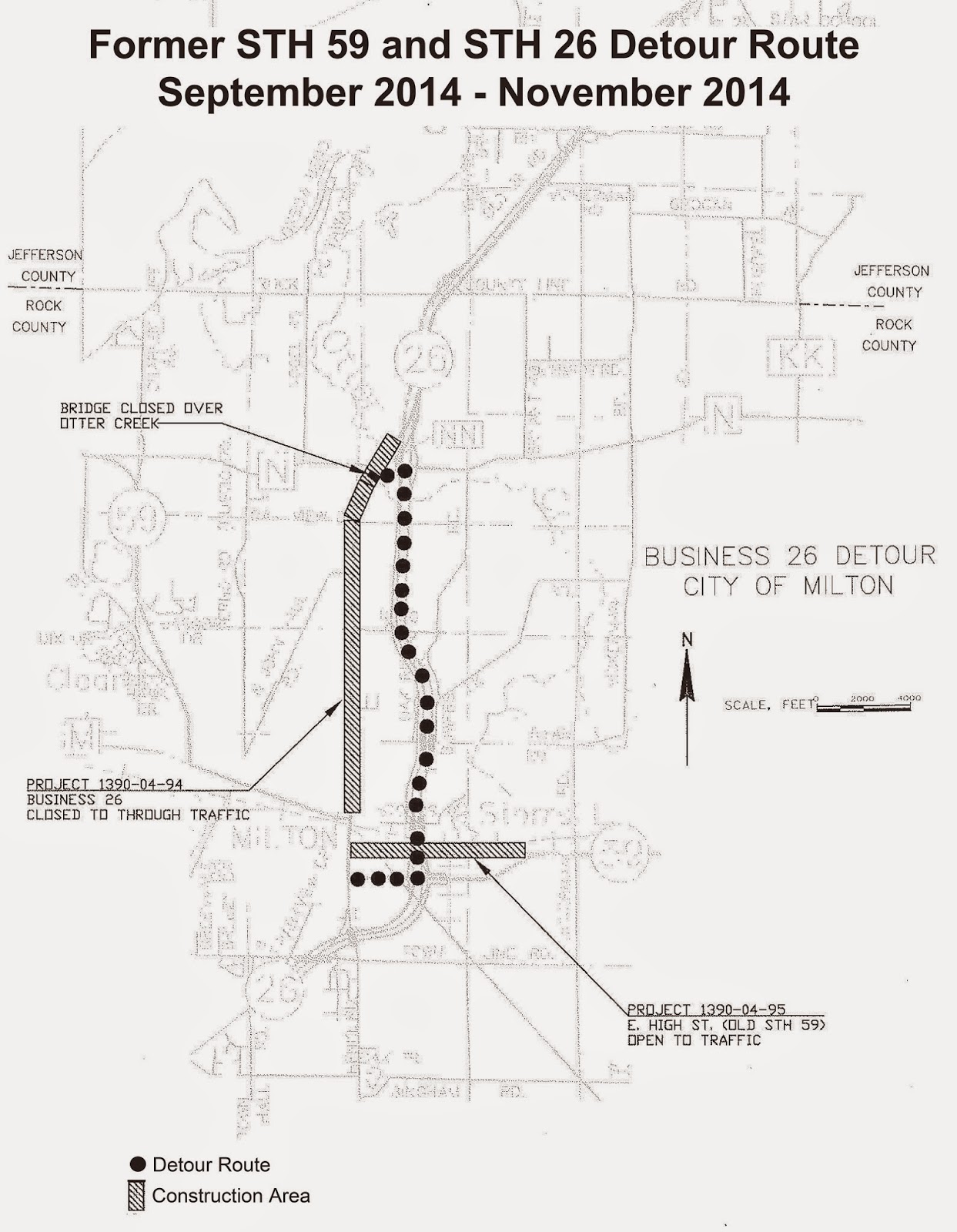 Beginning September 2, 2014, construction work will start on Janesville Street (former STH 26) to patch existing concrete pavement and construct a new deck on the Otter Creek Bridge and on High Street (former STH 59) to place new asphaltic pavement. A map of the detour is available at City Hall (710 S. Janesville Street), the Department of Public Works (150 Northside Drive), and on the City’s website (www.milton-wi.gov). Local traffic to businesses and residences will be allowed during this time. One lane of traffic is planned to be open on both roads at all times.

Businesses are allowed to place temporary signs in the right-of-way to direct patrons to their businesses. There is an Application for Permit to Install Temporary Business Sign(s) on Highway Right-of-Way During Improvement Project that needs to be completed for the temporary signs. Copies of the permit application are available on the City’s website, at City Hall, and at the Department of Public Works.

During an information meeting held on Wednesday, August 27, 2014, representatives from the Wisconsin Department of Transportation (WisDOT) stated that they will likely close the Otter Creek Bridge the week of September 2nd when the construction is scheduled to begin. This will not allow traffic from the north to use the former STH 26, now named Milton Road. The Otter Creek Bridge should be reopened by the first week of November.

Within the City limits, they are planning to repair the concrete on Janesville Street, the former STH 26, north of Hudson Street first. The section between Hudson Street and Madison Avenue will be repaired around the middle or end of September.

The blacktop pavement work on High Street, the former STH 59, is schedule for the later part of September.

The official ribbon cutting ceremony and opening of the Crossridge Park Playground has been rescheduled for Monday, September 15, 2014 at 5 p.m. due to the weather and anticipated forecast. Staff needs to complete landscaping items at the playground that they have been unable to complete due to the rain.

The official ribbon cutting ceremony and opening of the Crossridge Park Playground has been rescheduled for Thursday, August 28, 2014 at 5 p.m. due to the anticipated weather forecast and the delay of finishing one piece of equipment due to a missing part.

The Parks & Recreation Commission would like to thank the approximately 50 volunteers that helped during the Crossridge Park Playground Build Day on Saturday, August 23, 2014. The volunteers helped pick rocks from the playground site, dig holes, assemble slides and other equipment, and ultimately install each piece. The Parks & Recreation Commission could not have accomplished all that was done without the help of the dedicated volunteers that devoted a day to build a playground.

Build Day for the Crossridge Park Playground will still take place tomorrow, August 23, 2014. Due to the rain the last few days, the site is wet and muddy, so it is recommended that volunteers wear boots and attire appropriate for these conditions. If there are pieces of the playground that volunteers are unable to complete on Build Day, those interested in helping to complete the project will be asked to help finish the playground on Thursday, August 28, 2014 (weather dependent).

The Wisconsin Department of Transportation will hold an information meeting to discuss construction work taking place on old Highway 26 and old Highway 59 in Rock County. The meeting is scheduled from 4:30-6 p.m. on Wednesday, August 27 at the Milton Public Library, 430 E. High Street.

Construction is expected to start September 8th. Old Highway 26 will be closed to through traffic and old Highway 59 will remain open to traffic. Construction is scheduled for completion in early November.

The public is encouraged to attend the meeting, provide input and ask questions concerning this project. Maps showing the construction work will be on display. WisDOT and highway contractor representatives will be available to discuss the project.

If you are unable to attend the meeting, or would like more information, contact Jim Oettinger at (608) 246-3879 or james.oettinger@dot.wi.gov.
Posted by Inga Cushman - Assistant to the City Administrator at 3:42 PM 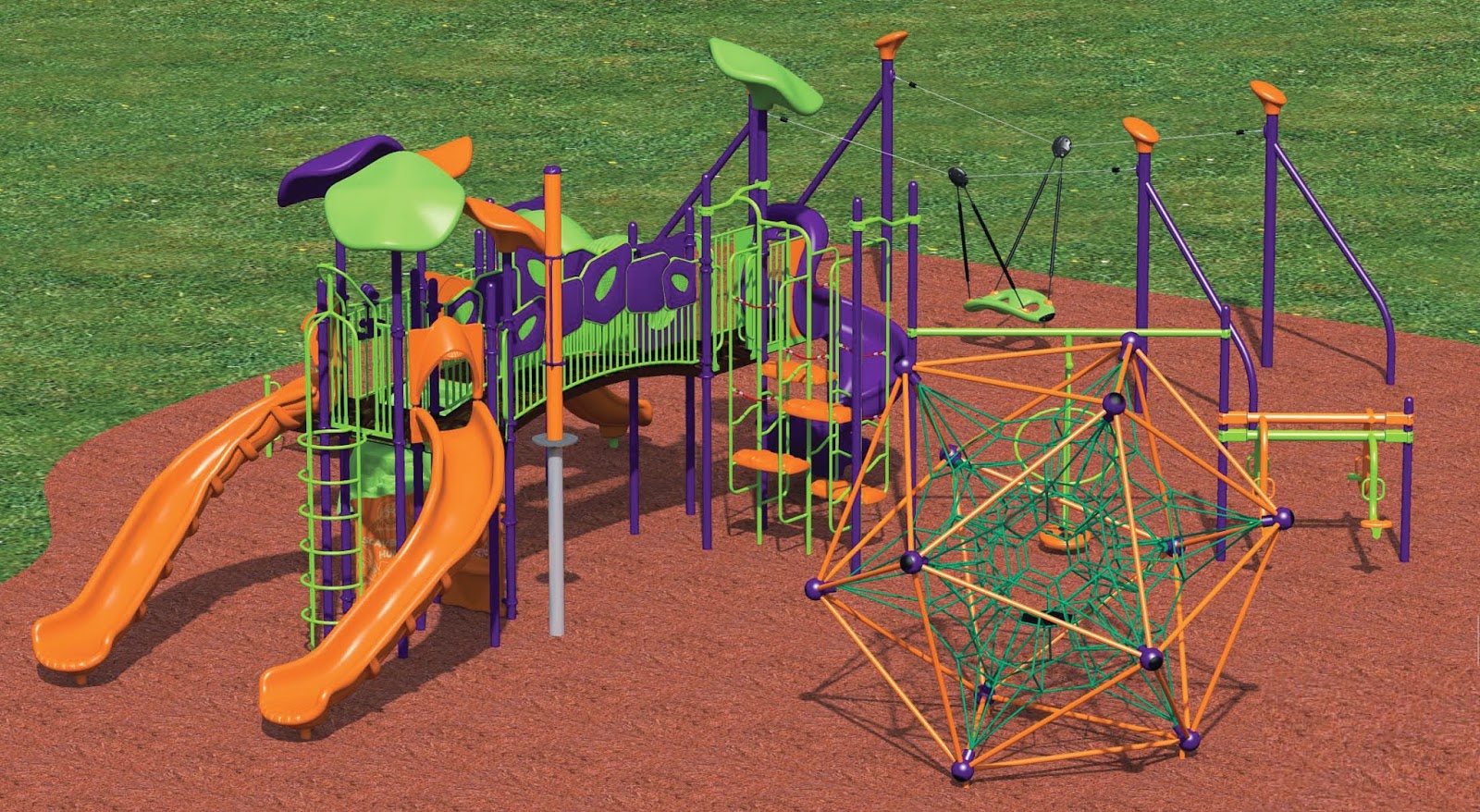 The Crossridge Park Build Day is scheduled for August 23, 2014, and the Parks & Recreation has finalized the schedule for the day.

The schedule is as follows:
If you are interested in volunteering, contact Inga Cushman at City Hall at (608) 868-6900 or by email at icushman@milton-wi.gov. Only volunteers 18 and over will be able to work on constructing the physical playground equipment, but there will be other tasks that those under 18 can do on Build Day.

The playground will not be able to be used until Monday, August 25, 2014 after the ribbon cutting ceremony at 6 p.m. to allow time for the playground equipment to set.

The I-39/90 Expansion Project continues to move forward in the design phase. The segment teams continue to meet with stakeholders along the corridor to present design alternatives and receive feedback.

With Interstate reconstruction and expansion starting in 2015, construction schedules are now available on the I-39/90 Expansion Project website under the Schedule tab, and provided below for your convenience. NOTE: Dates are subject to change.
You can also provide feedback on the I-39/90 Expansion Project by visiting the Project Comments section.

For more information, contact:
Steven Theisen
I-39/90 Project Communications Manager
(608) 884-1230 | steven.theisen@dot.wi.gov
Posted by Inga Cushman - Assistant to the City Administrator at 11:21 AM

A Public Open House for the Bicycle Pedestrian Section of the 2016-2045 Janesville Area Long Range Transportation Plan will be held at the Milton Public Library on August 25th from 5:00pm to 7:00pm.

Attendees will be invited to view maps of existing plans, share thoughts regarding how to make the Janesville/Milton area a better place for biking and walking, and participate in a brief fiscal prioritization exercise to provide feedback on what types of improvements should be a priority for funding. This open house serves as an early public outreach session to gather information and concerns from residents.

If you are unable to attend the public open house but would like to comment, please forward comments to Terry Nolan at 755-3095 or email: nolant@ci.janesville.wi.us.
Posted by Inga Cushman - Assistant to the City Administrator at 11:18 AM 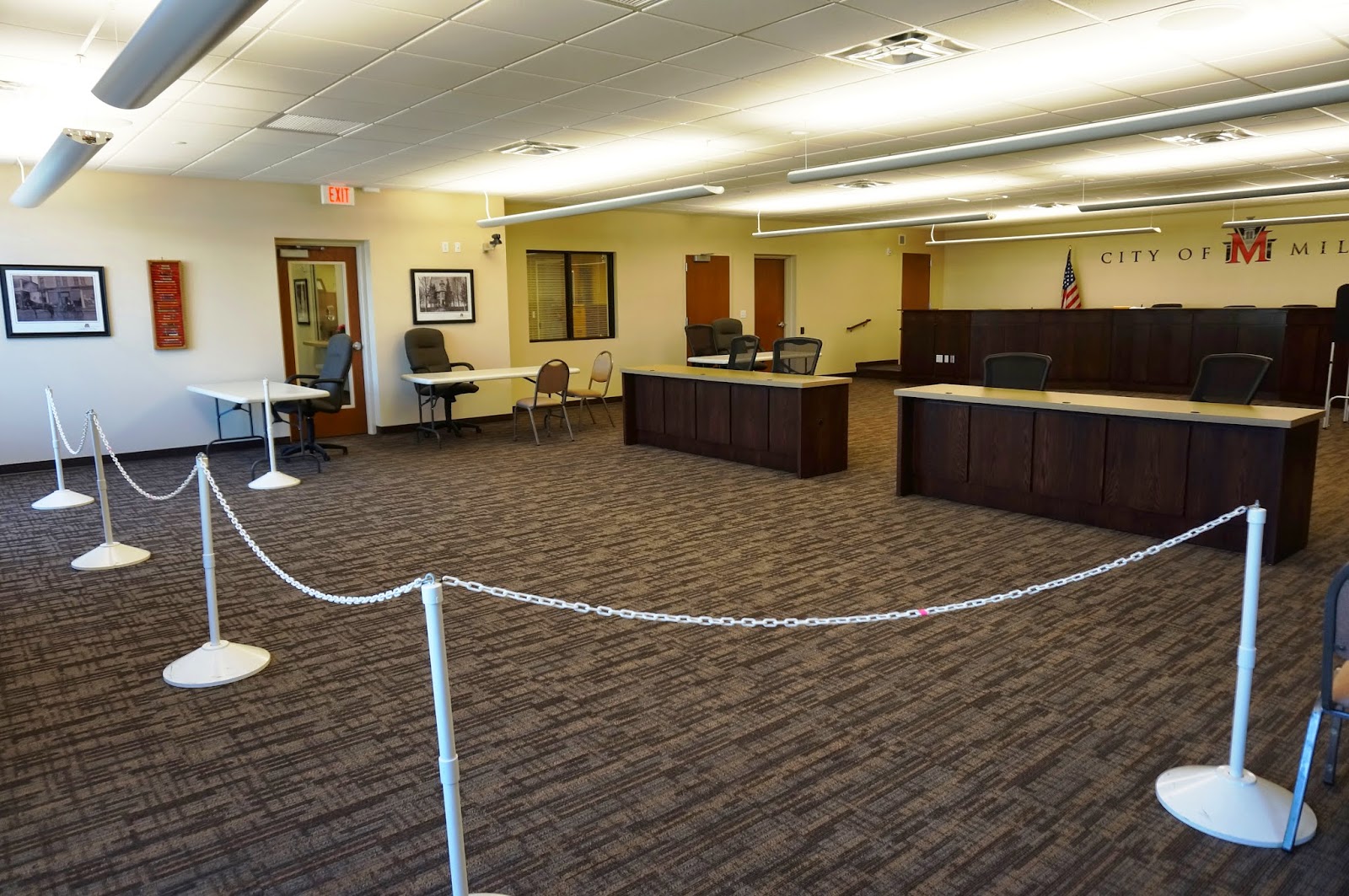 City of Milton staff are ready for the election that will take place tomorrow, August 12th. The polls will be open in the Council Chambers at the new City Hall, 710 S. Janesville Street, from 7 a.m. to 8 p.m.
Posted by Inga Cushman - Assistant to the City Administrator at 11:13 AM

InterCon is televising sewer mains in various commercial areas of the City of Milton for the rest of this week and possibly into next week.  They will be using the manholes in order to do this, and they have a white truck/van that says InterCon on it.
Posted by Inga Cushman - Assistant to the City Administrator at 10:16 AM 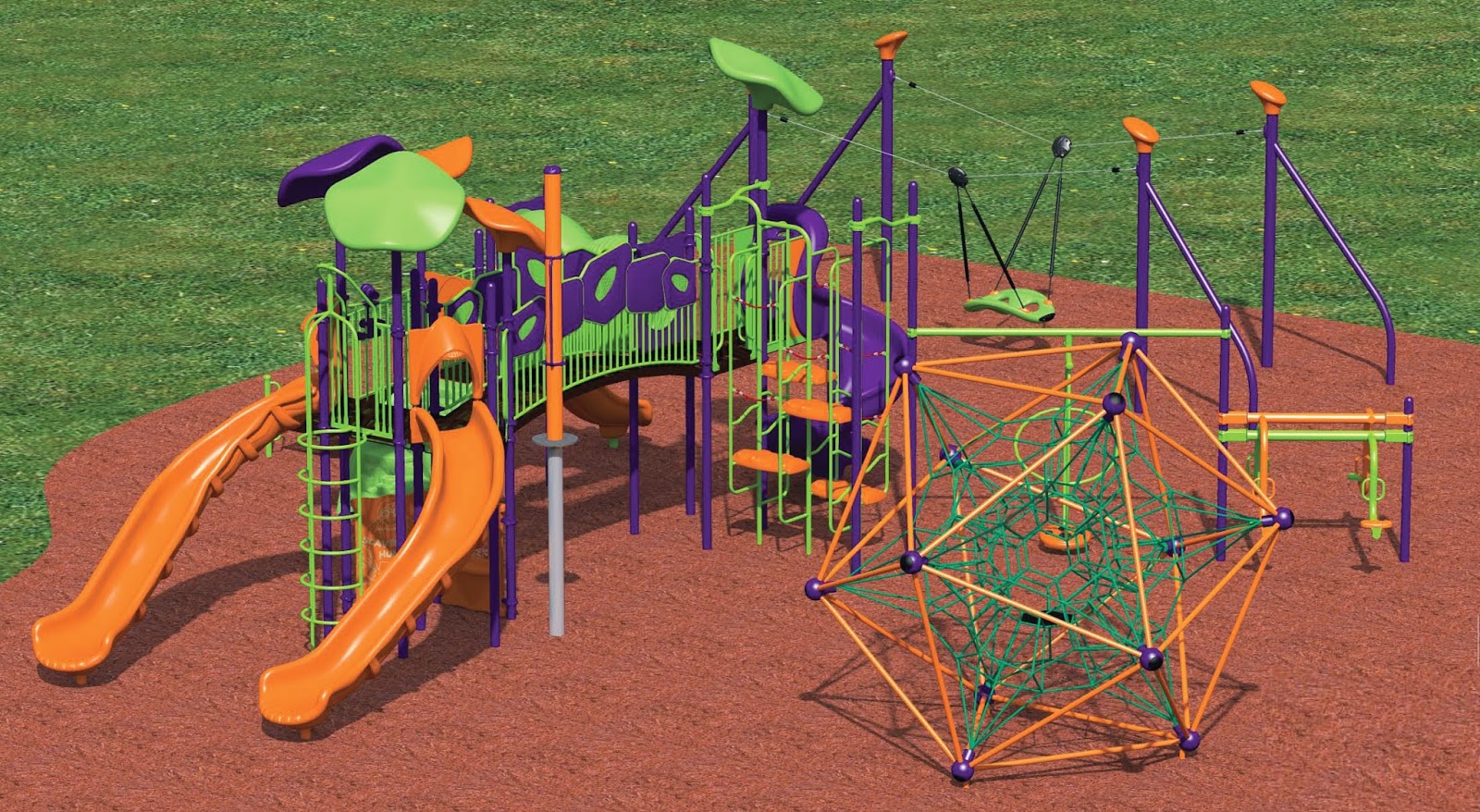 The Parks & Recreation Commission will be hosting a Crossridge Park Playground Build Day meeting to discuss the construction of the playground on August 7, 2014 at 6 p.m. at City Hall, 710 S. Janesville Street.

The commission will need approximately five volunteers who will be willing to serve as Project Leaders on Build Day. These volunteers will lead a small group in the construction of assigned pieces of the playground. If you are interested in serving as a Project Leader, please contact Assistant to the City Administrator Inga Cushman at (608) 868-6900 or by email at icushman@milton-wi.gov. All Project Leaders will be encouraged to attend the meeting on August 7th to receive additional information about their assigned projects on Build Day.

The Parks & Recreation Commission is still fundraising for the Crossridge Park Playground. All donors will be listed on a donation recognition board in the following levels:
At $5,000 or more, businesses or individuals may have the opportunity to sponsor a bench or a specific feature of the playground. Contact City Hall to see what is available.

The Parks & Recreation Commission would like to thank the following businesses and organizations that have already committed to the project:
For additional information contact Assistant to the City Administrator Inga Cushman at 608-868-6900 or by e-mail at icushman@milton-wi.gov.

Sheriff Spoden wants to remind citizens that Rock County tests the Outdoor Warning System sirens on a monthly basis from April through October every year. The sirens are tested at 12:05 pm on the first Wednesday of the month unless RockCounty is threatened with inclement weather at the time. In the event that there is a chance of inclement weather, siren testing will be postponed until 12:05 pm on the second Wednesday of the month.

The Rock County Outdoor Warning System will conduct monthly siren tests on August 6th, 2014 at 12:05 pm. The test signal will be 1 -2 minutes in duration.Please tune in to your local radio stations or weather radios for all weather related information and instructions when the sirens are sounded.

Test Signal vs. Tornado Warning
In the event of a tornado warning, the sirens will alert steadily for three to five minutes. This lengthy alert tone will indicate that citizens should immediately take shelter and tune in to local broadcasting stations or weather radios for further information.

Citizens are reminded that they should not call the Rock County 911 Communications Center or local radio stations for weather information. If residents find that the siren in their area is not working, they should contact the Rock County Sheriff’s Office – Emergency Management Bureau at 608-758-8440. For further information on the Outdoor Warning System, please visit http://www.co.rock.wi.us/outdoor-warning-system.
Posted by Inga Cushman - Assistant to the City Administrator at 8:00 AM