Below is a press release from Milton Police Chief Dan Layber.

Update on the STH 26 Bypass Project

Below is information that the City received regarding the STH 26 Bypass work.

The concrete paving work for the Milton Bypass will be starting next week. The paving contractor has mentioned that they will be starting somewhere between Monday and Wednesday of next week (weather dependent). They are starting in the SB lanes at the south end of the project by the new Henke Rd bridge and will proceed north to CTH N. The paver will then turn around and pave the NB lanes from north to south. Ramps at CTH N and STH 59 will be poured as cure time for the concrete allows.

With the paving operation, the contractor must get on the new slab very early after the concrete is placed and sawcut relief joints in the pavement (standard practice). This work will most likely be going on into the night. I wanted everyone aware that this work will be taking place at night. The sawing work is very critical to the pavement performance to control cracking.

Overall, the mainline paving operation should take about 5 days for the SB lanes and another 5 days for NB lanes. Ramps and all the tie-ins to the bridges will also be taking place as cure time allows. Concrete work should be taking place most of June and into July potentially.

Posted by Inga Cushman - Assistant to the City Administrator at 1:32 PM 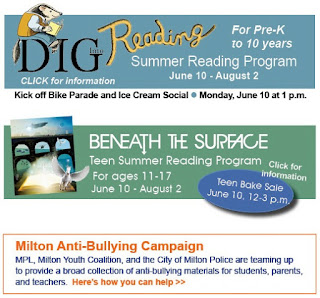 The Milton Public Library has geared up for the summer with a myriad of events and activities for all ages. This summer, the library encourages adults, teens, and children to use the library as an easy way to keep busy with fun activities and to read for fun and prizes. All events are free and open to the public.

For more information and a complete listing of all our events, go to www.miltonpubliclibrary.org and click on the Summer Reading brochure.
Posted by Inga Cushman - Assistant to the City Administrator at 10:44 AM

This Saturday, June 1st, will be a busy day in the City of Milton.  The City-Wide Rummage Sales will be taking place all day.  A list of rummage sales is available in this week's Milton Courier.  The Milton Area Chamber of Commerce (MACC) and the Milton College Preservation Society will be holding a rummage sale fundraiser from 8 a.m. to 2 p.m. at Main Hall, 513 College Street.

A dedication ceremony to recognize all of the improvements that have been completed at the baseball diamonds at Lamar Park, including new dugouts in honor of Jack Gallun, will be held at 11:30 a.m. on Saturday at Lamar Park. 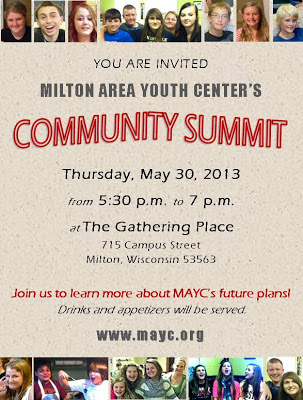 
The City of Milton Historic Preservation Commission will be holding several Historic Walking Tours throughout the summer and fall. The walking tours will highlight the City’s historic properties and the guides will provide anecdotes about the properties.

Below is a press release from Milton Police Chief Dan Layber.

On Friday, May 24, 2013, the Milton Police Department in conjunction with the Milton School District conducted drug dog searches of the Milton High School and Milton Middle School.  These were routine searches during which the school parking lots, hallways, lockers and class rooms are searched for illegal drugs. During the searches this morning no drugs or paraphernalia were recovered from school premises. Searches were conducted by Milton Police Officers, along with High School and Middle School staff. The drug dogs were provided by the Janesville Police Department, Jefferson County Sheriff’s Department and the Wisconsin State Patrol. This is an ongoing effort by police and school officials to keep schools safe and to keep drugs out of the school  environment.

Posted by Inga Cushman - Assistant to the City Administrator at 1:15 PM

Please also note that City offices will be closed on Memorial Day, May 27, 2013.
Posted by Inga Cushman - Assistant to the City Administrator at 8:24 AM


Below is a press release from Milton Police Lieutenant John Conger about their participation in the "Click It or Ticket" campaign.

The City of Milton Police Department will be participating in the upcoming statewide “Click it or Ticket” campaign which takes place between May 20th and June 2nd. During that time our officers will be making traffic stops for a variety of violations, but they will be putting extra emphasis on enforcing Wisconsin’s safety belt laws.

Traffic crashes are the leading cause of death for teens and young adults nationwide.

In Wisconsin, in 2011, 336 drivers and passengers were killed in traffic crashes. Over half of those victims were not wearing their safety belts. Furthermore, safety belt usage is the most effective way to prevent being ejected from a vehicle during a crash.
Posted by Inga Cushman - Assistant to the City Administrator at 8:14 AM


Below is a press release from Milton Police Lieutenant John Conger.

Our agency has become aware of a potentially dangerous competition that our local high school students are engaging in.

It has come to our attention that students are competing in a “Nerf Gun War”. The object of the competition is to “shoot” other participants with a Nerf gun bullet, and they’re then eliminated from the game.

The real danger in this competition is that we’re receiving information that students are firing in traffic at moving vehicles, and furthermore, breaking into homes in the middle of the night, to shoot participants in their beds while they sleep.

We are cautioning the students that these acts could be considered criminal, and there is great risk involved in breaking into unknown dwellings, when the inhabitants may arm themselves out of fear that a true burglary is taking place.

We also ask that parents speak with their children about these very real dangers, if they are aware they are participating in this competition.
Posted by Inga Cushman - Assistant to the City Administrator at 8:11 AM

Below is a press release from Milton Police Lieutenant John Conger about an elder abuse arrest.

On May 23, 2013 at approximately 11:00 a.m. our agency arrested Syren Bolderdene on a felony charge of Abuse Of An Individual At Risk. Mr. Bolderdene is 35 years old, and has a permanent Chicago address.

Mr. Bolderdene was privately contracted to be a live-in caretaker for a 76 year old Milton man.

On May 21st Milton EMS was dispatched to the victim’s address at the request of Bolderdene, as the victim had reportedly fallen, and Bolderdene was unable to get him upright. The victim was then transported to Mercy hospital for treatment of injuries and other ailments that were the result of his living conditions.

Our initial investigation has revealed suspicious fractures, bruising and scratches upon the victim. Furthermore, it is believed that the victim was left in a soiled diaper and bedclothes for a time period that is believed to be, at a minimum, in excess of 24 hours, causing him to be saturated in his own urine and feces.

Mr. Bolderdene was transported to and held at the Rock County Jail. He will appear tomorrow in Rock County Circuit Court.

NOTE: Pursuant to the directive of the Wisconsin Supreme Court, as found in Supreme Court rule 20:3.6, trial publicity, you are advised that a charge is merely an accusation and that a defendant is presumed innocent until and unless proven guilty.
Posted by Inga Cushman - Assistant to the City Administrator at 8:10 AM 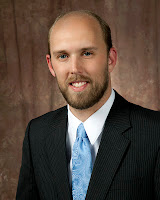 Mayor Brett Frazier is proud to announce a series of listening sessions he will hold throughout the City as he develops his executive budget which will be presented to the Common Council in October of 2013. “I want to hear from Milton residents and businesses as I work with staff to put together my executive budget that will be presented to the Council this fall,” stated Mayor Frazier.

Frazier went on to state that, “We’ll have to make some tough choices to keep Milton affordable this year and every good idea should be on the table. That is why I would like to invite any citizen, as well as employees and Department managers to be an active part of these listening sessions."

“My goal is to present to the Council a budget that delivers the services that our citizens expect and deserve and one that keeps the City of Milton an affordable place to live and do business. We can balance affordability with progress."

The first listening session will be held on Wednesday, May 29, 2013 at 6 p.m. in the Council Chambers located on the lower level of the Shaw Municipal Center, 430 E. High Street.

For questions or concerns about the listening session, please contact City Administrator Jerry Schuetz @ 608-868-6900 ext. 4, or via e-mail at jschuetz@milton-wi.gov.
Posted by Inga Cushman - Assistant to the City Administrator at 11:47 AM

Rock Road is starting grading operations at the intersection of Whitetail Lane and Old STH 26 starting at 7 p.m. tonight. Whitetail Lane is located just south of Fort Atkinson, and the work is being completed in conjunction with the STH 26 Bypass Project.

For more information about this work, please read this letter from Rock Road: http://www.ci.milton.wi.us/DocumentCenter/View/237.
Posted by Inga Cushman - Assistant to the City Administrator at 1:07 PM

May News for the Milton Public Library 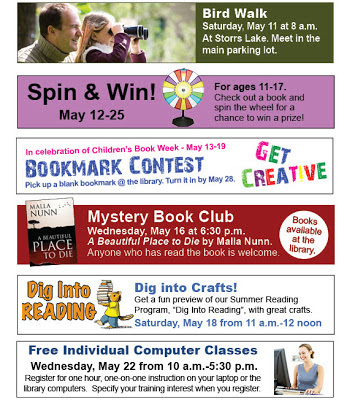 Posted by Inga Cushman - Assistant to the City Administrator at 9:58 AM