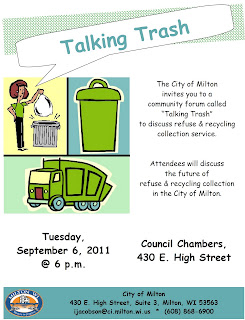 The City of Milton will be hosting a community forum called “Talking Trash” at 6 p.m. on Tuesday, September 6, 2011, prior to the regularly scheduled Common Council meeting. The purpose of the forum is to hear community stakeholder input regarding the City’s recent request for proposals on refuse and recycling services.

The City’s current agreement with Waste Management has expired, and requests for proposals were sent out in June of 2011 pursuant to the direction of the Common Council. The City has received multiple proposals, and staff is recommending the community and its elected leaders evaluate four different alternatives for refuse and recycling collection that include the following:
The community will have the opportunity to listen to all four alternatives including their costs and benefits. Community stakeholders will also be afforded time to share their thoughts on the current service, and what they would like to see in the future. Community input will then be shared with the Council at their regularly scheduled meeting that night at 7 p.m. when action on the selection of a refuse/recycling service may be taken.

The community forum is being advertised as “Talking Trash,” and coordinated by the City’s community services manager. The event will be held at the Shaw Municipal Building on Tuesday, September 6, 2011 at 6 p.m. For those not able to attend, questions, comments, or concerns related to this service may be directed to Community Services Manager Inga Jacobson via phone at 608-868-6900 ext. 4 or via e-mail at ijacobson@ci.milton.wi.us.
Posted by Inga Cushman - Assistant to the City Administrator at 11:44 AM