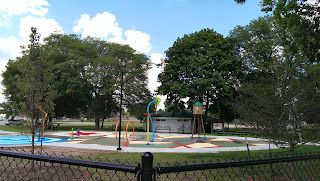 The City of Milton is proud to announce the Grand Opening celebration for the Goodrich Square Splash Pad. The Grand Opening is scheduled for Friday, July 19, 2013 at 5 p.m. The Goodrich Square Steering Committee, City of Milton Common Council, and City staff worked diligently over the past two years to bring this exciting project to life and cordially invite the public to attend this event that celebrates the grand opening of the Splash Pad and the community’s redevelopment efforts in Goodrich Square.

Mayor Brett Frazier commented on the celebration by stating, "This is a project that has only been possible because of the efforts of our entire community. From businesses, to citizens young and old, to elected and appointed officials and everyone in between, this has been an example of the strong sense of community that makes Milton special."

Frazier went on to emphasize that the excitement associated with this project will be used as a catalyst for future redevelopment efforts in Goodrich Square, stating, “This is a strong first step in the redevelopment of Goodrich Square as a focal point of recreation and commerce in the City of Milton."

The Goodrich Square Splash Pad is scheduled to be open 10 a.m. to 8 p.m., 7 days per week. The splash pad will generally be staffed during regular operating hours and concessions will be sold at the splash pad from the pavilion.