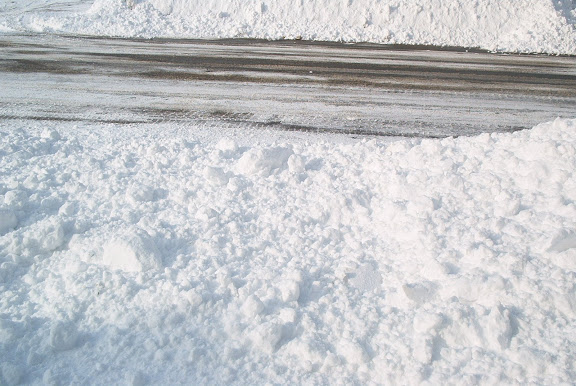 This time of year the City offices get many calls about "windrow". Windrow is that sometimes massive amount snow that ends up at the end of your driveway as the City snow plow drives by. Practically every snow event causes complaints about this, often coupled with four letter words and other expletives. Let's ignore the expletives for now, and take a moment to focus on the heart of the matter.... SNOW!
First, we need to admit that this is a universal dilemma in a climate like ours. I deal with the same "windrow" at the end of my driveway as well. Unfortunately, that is a reality of the plowing operation. Let's also agree that the snow needs to be removed as quickly as possible from the streets for obvious reasons.

I understand that it can be easy for some residents to think that the plow drivers are strategically working to shove as much snow in driveways as possible. But before jumping to that conclusion I would ask that residents take a moment to think about the realities of a snow plowing operation. While it would be nice if we could take extra special steps to avoid windrow on driveways, it simply is not practical. The City's plow drivers are concerned about getting the plow to the curb line as carefully as possible, clearing the street as completely as possible, making sure they don't clip a mail box, and watching for pedestrians, dogs, parked cars, traffic, etc. At the same time, they are trying to complete the plowing operations as quickly as possible to make the roads safe for motorists.
Milton's citizens must be treated fairly and receive the best possible service we are able to offer. I'm sorry that some residents become frustrated with windrow, but we'll continue to do the best we can, even during these difficult winter storm events.
With that, I would just offer a couple of suggestions. First, consider the "good neighbor" approach to snow clearing. Personally, I often take the extra step to snowblow the extra snow at the end of my neighbor's driveway or sidewalk in addition to my own. For those who are lucky enough to own a snowblower or truck with a plow, why not take some extra time to clear out driveways and sidewalks for neighbors who may not have that equipment (especially for those who are ill or elderly).
Second, if possible make a "pocket" for snow to drop prior to the plow reaching your driveway. Check out the image below. This won't totally eliminate the problem, but it might put some of the biggest chunks in the "pocket" instead of your driveway.

Posted by Todd Schmidt - Milton City Administrator at 9:45 AM