A Lesson in Plowing

The City recently purchased a new plow truck, and for the first time we have a truck that includes a "wing". With this latest snow, I spent some time in the truck plowing with DPW employee Donnie Zimmerman. Thought I'd share some of that experience with you...

So, here's the new truck. You can see the wing, which is lowered in 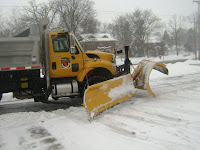 this picture. It lifts and tucks up next to the passenger side of the cab when not in use. First thing I noticed when I hopped in was that Donnie keeps it nice and toasty warm in the cab. I found out, however, that's not all for comfort. It helps keeps the windshield warmer, which helps melt the blown snow that can come up from around and over the plow blade. 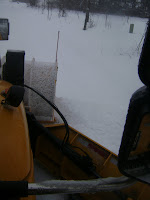 direction. While on Bowers Lake I stuck my head out the window and snapped these pictures of the main plow and wing in action.

I learned a few things from Donnie about what is challenging for plow drivers, and what motorists should do when they are around a big plow truck like this. First, don't follow very close. It's hard for the driver to see you. And, if the plow pulls into an intersection and stops to move snow or back up, please don't just stop behind the truck and sit there. Make your way around the plow and get out of the intersection. Finally, there's lots 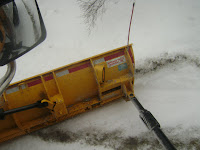 for a plow driver to be aware of while plowing. You can make it much easier as a motorist by signaling all of your movements, and avoid quick turns in front of the plow. If possible, give the plow truck the right-of-way and be patient.

As for those of you who care to shake your fists and throw your shovels at the trucks for putting snow back in your driveways, please know that our drivers don't enjoy ruining your clear driveway. It's just the fact that snow has to go somewhere. Next time you are inclined to shake your fist, why not remember that these guys work very long hours to keep the streets cleared for you and your neighbors. Consider a friendly wave instead... 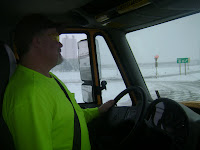 Donnie, thanks for the ride. Also, thanks for not whacking any mailboxes with the wing while I was leaning out the window taking pictures. :)

Posted by Todd Schmidt - Milton City Administrator at 10:35 AM