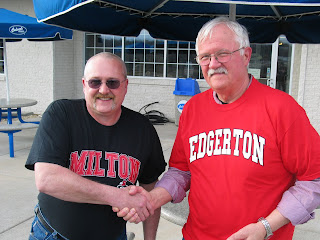 On March 10, 2010, City Council President Ron Webb from the City of Edgerton challenged Mayor Tom Chesmore of the City of Milton to a 2010 Census Challenge. The leader from the community with the lowest mail-in Census response rate as of April 30, 2010 has vowed to attend a City Council meeting wearing a shirt boldly advertising the other community’s logo. The winner will be announced on May 3, 2010.

Beginning March 22, 2010, the Census will be updating an online, interactive map that will show the response rates for municipalities. The map is available at http://2010.census.gov/2010census/take10map/. The last update and the announcement of the challenge winner will occur on May 3, 2010.

Come on Miltonites! Get those census forms in and let's make sure Mr. Webb finds himself wearing Milton Red instead of Edgerton Red!!! Don't let history from 2000 re-occur, when Edgerton outpaced Milton's return rate 86% to 84%.
Posted by Todd Schmidt - Milton City Administrator at 9:00 AM