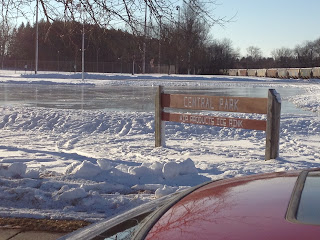 The ice rink along with the adjacent warming house will be open for public use starting on January 8, 2013 during the following hours:
The City of Milton is still accepting donations of new and used ice skates. Those interested in donating ice skates can drop them off at the Milton Public Library or at Milton City Hall, both located at 430 E. High Street in Milton.

In October of 2012, the Mayor and Common Council approved the project work necessary to re-open the rink. Due in large part to a generous donation from Air Products, a new clay liner was installed during the fall of 2012, which allowed the rink to retain water and the rink to be re-opened. In recognition of their generous donation, the City’s Parks and Recreation Commission recommended that the rink be re-named from Tomah Products Ice Rink to Air Products Ice Rink.

If you have questions about the grand re-opening of the ice rink or donating ice skates, please contact City Administrator Jerry Schuetz at 608-868-6900 ext. 4 or via e-mail at jschuetz@ci.milton.wi.us .
Posted by Inga Cushman - Assistant to the City Administrator at 4:04 PM