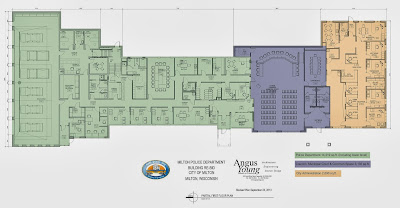 For the past several months, Mayor Frazier and the City of Milton Common Council and City staff have worked with Angus Young and Associates in evaluating options for the proposed renovations of the former Dean Clinic building in Milton. These options included renovating the City-owned building into a Police Department facility, and along with that, the relocating of our City Hall offices to accommodate the proposed expansion of the Milton Public Library. The City’s elected and appointed officials have sought to evaluate long term needs for all three facilities, and balance those needs with the affordability of Milton’s taxpayers to fund the projects.

The Council’s budget parameters for the project were clear. When the project was initially bid in August, bids came in significantly over bid day estimates provided by City engineering consultant, Angus Young and Associates and all bids were rejected.

As elected officials have done with all projects, the Council evaluated other options to achieve project goals within the project budget. This process was exhaustive and included a police only facility and consideration of an offer to lease or purchase the former Milton Savings Bank, now owned by the Bank of Milton.

AYA re-bid the project again in September and the City is pleased to report that after meeting with the low bidder, and consulting with AYA staff, our City Attorney and City Staff, a project plan has been approved and bid accepted by the Common Council for a project that meets Milton’s long term facility needs at a price taxpayers can afford. Existing fund balances will pay for project quantity enhancements permitted by WI State Statute to the proposed police station renovation that will allow the City’s general administration services to operate out of the same building as the police station, and do so at a cost that is well within the Mayor and Council’s established budget parameters of $2.45 million.

This project secures Milton’s facility needs for our police department and City administration, and makes way for the proposed expansion of the Milton Public Library within the Shaw Municipal building.

While this project has taken more time to come together than first hoped, the result of the process is a plan that secures facility needs for the police department and City Hall for decades to come. It is always the priority of the City to ensure that each dollar invested on behalf of the citizens of the City of Milton is invested wisely and with a balance between long-term needs and affordability both now and in the future. The road may well have been longer than intended or anticipated, but the end result is a project and a facility, as well as a deliberative process, that citizens can and should be proud of.