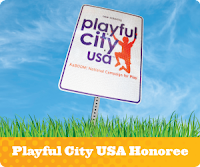 WASHINGTON, D.C. – With research proving play is critical to the overall well-being of children, 217 cities and towns, including the City of Milton, earned recognition from national non-profit KaBOOM! as 2013 Playful City USA communities for their efforts to give children the childhood they deserve by providing ample opportunities for play.

Today’s generation of children play less than any previous generation despite the vast benefits of play. The Journal of the American Academy of Pediatrics reports that play is essential to the social, emotional, cognitive and physical well-being of children.

Sponsored by the Humana Foundation, Playful City USA is a national program from KaBOOM! that celebrates and promotes local policies that increase play opportunities for children and is a key platform in combating the lack of play among children.

“Here in Milton we recognize the huge positive impact that play has on the lives and the development of our kids,” Mayor Brett Frazier said. “That’s why we’ll be investing in upgrading our public parks this year and beyond. New playground equipment, walking and biking trails, a splash park, sports fields and more active space in our soon-to-be expanded public library are just a few of the many examples of how the City of Milton invests in our kids by investing in the places they play. I’m honored by the distinction!”

KaBOOM!, the national non-profit organization dedicated to giving kids the childhood they deserve by bringing play to those who need it most, created Playful City USA in 2007 to help local governments address the lack of play and it is through mayors, city council members, parks and recreation departments, school districts and community leaders that the program succeeds in benefitting children.

“Kids need to play actively, every day, at home, in school and in their communities, yet play is disappearing,” said Darell Hammond, Founder and CEO of KaBOOM! and author of The New York Times Best Seller KaBOOM!: A Movement to Save Play. “Children spend nearly eight hours a day in front of a screen; almost half of all poor students are deprived of recess; and to make matters worse, only one in five children live within walking distance of a park. Playful City USA communities like Milton are creating innovative programs and initiatives and deserve recognition because of their efforts to give kids the childhood they deserve and best prepare them for their future.”

Hailing from 43 states, the 217 Playful City USA honorees range in size from seven-time honorees such as San Francisco and Spartanburg, S.C., to first-time recipient Ellsworth, Kan. (population: 3,100). These Playful City USA communities are making a commitment to play and physical activity by developing unique local action plans to increase the quantity and quality of play in their community.

KaBOOM! also selected Milton for its outstanding dedication to play. Local community leaders in Milton helped establish Transform Rock County as a new coalition working to promote physical activity and healthy food systems. The city has a partnership with the local school district to allow use of city recreational facilities during school hours and for school facilities outside of school hours. The city has also renovated several parks and playgrounds in recent years with the input and support of local residents, businesses, and organizations.

The 217 Playful City USA communities are now eligible for $15,000, $20,000 and $30,000 grants via Let’s Play, a community partnership led by Dr Pepper Snapple Group to get kids and families active nationwide. Grant recipients will be announced in the fall.

For more information on the KaBOOM! Playful City USA program, including Let’s Play grants and applications for 2014, visit www.playfulcityusa.org.

Posted by Inga Cushman - Assistant to the City Administrator at 12:19 PM