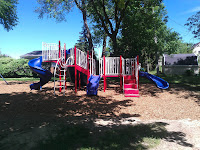 Mayor Brett J. Frazier, the City of Milton Common Council, and the City’s Park and Recreation Commission are inviting the community to celebrate the City’s grand re-opening of Veteran’s Park in the City of Milton. The grand re-opening ceremony will take place on Thursday, June 27, 2013 at 6 p.m. in front of the newly installed playground equipment.

After approval from the City’s Park and Recreation Commission and City Council were secured as part of strategically budgeted City park upgrades for 2013, the City’s public works department installed brand new playground equipment on the east end of Veteran’s park and in early June replaced the pillars on the Park’s pavilion. The additions complimented privately donated work done on the west end of Veteran’s park in the form of a beautiful Veteran’s monument installed as a part of a local Eagle Scout project coordinated by Wesley Helmeid from Troop 471.

Mayor Frazier commented on the grand re-opening stating, “The investments made in Veteran’s Park, both public and private, signify our City’s continued commitment and on-going efforts in improving Milton, keeping our City’s parks a safe and enjoyable place for children and families to enjoy forever. We will keep making investments and more importantly improvements into our City’s parks to keep them engaging, and fun places for kids and their families."

If you have any questions about the grand re-opening of Veteran’s Park, please contact City Administrator Jerry Schuetz at (608) 868-6900 or by e-mail at jschuetz@milton-wi.gov.
Posted by Inga Cushman - Assistant to the City Administrator at 9:48 AM