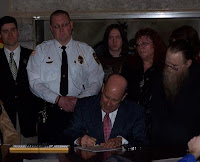 Last week Milton PD Lieutenant John Conger attended an event where Governor Doyle signed a new bill that puts greater regulation on traveling sales crews. For those who do not know, John was the first responding officer to a tragic crash just outside of Milton several years ago that claimed the lives of 7 people in a traveling sales crew that was switching driver’s while driving at the time of the crash. John has worked with the victim’s families to help get this legislation passed. This type of effort demonstrates a commitment to problem solving not only through the enforcement of the law, but in working with other branches of government to help create laws that are designed to keep people safe. Please congratulate John on the success of this cooperative effort when you see him. Included here is a picture of Lt. Conger (white shirt/badge) and the Governor at the signing.