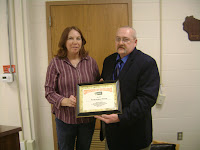 Below is the text from a recent press release from Milton Police Chief Jerry Schuetz regarding Milton businesses being honored for preventing youth tobacco purchases. Pictured to the left is Sherry Fisher from Rock County Youth2youth presenting Mayor Chesmore with a certificate of excellence.