Community Meeting on January 20th for the Crossridge Park Playground 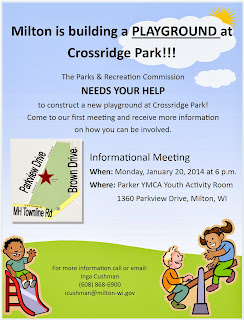 Milton is building a playground at Crossridge Park, and the Parks & Recreation Commission needs your help! The Commission will be hosting a community meeting on January 20, 2014 at 6 p.m. in the Parker YMCA Youth Activity Room, 1360 Parkview Drive, to discuss the design and development of the playground and inform the public how they can be involved in the building of the playground.

Dr Pepper Snapple Group (DPS) and national non-profit KaBOOM! awarded the City of Milton a $20,000 Let’s Play City Construction Grant as announced September 9, 2013. The City of Milton received the grant because it was selected as a 2013 Playful City USA community by KaBOOM! on May 7, 2013. The City will use the grant to build a new playground at Crossridge Park near the new Parker YMCA with community involvement using the KaBOOM! Community Build Model, which requires the use of volunteers to construct the playground.

The Parks & Recreation Commission is also requesting that community members submit their ideas for the design of the playground. Ideas can be submitted through the Community Voice Module on the City’s website (http://www.milton-wi.gov/communityvoice), emailed to icushman@milton-wi.gov, or dropped off at City Hall (430 E. High Street).